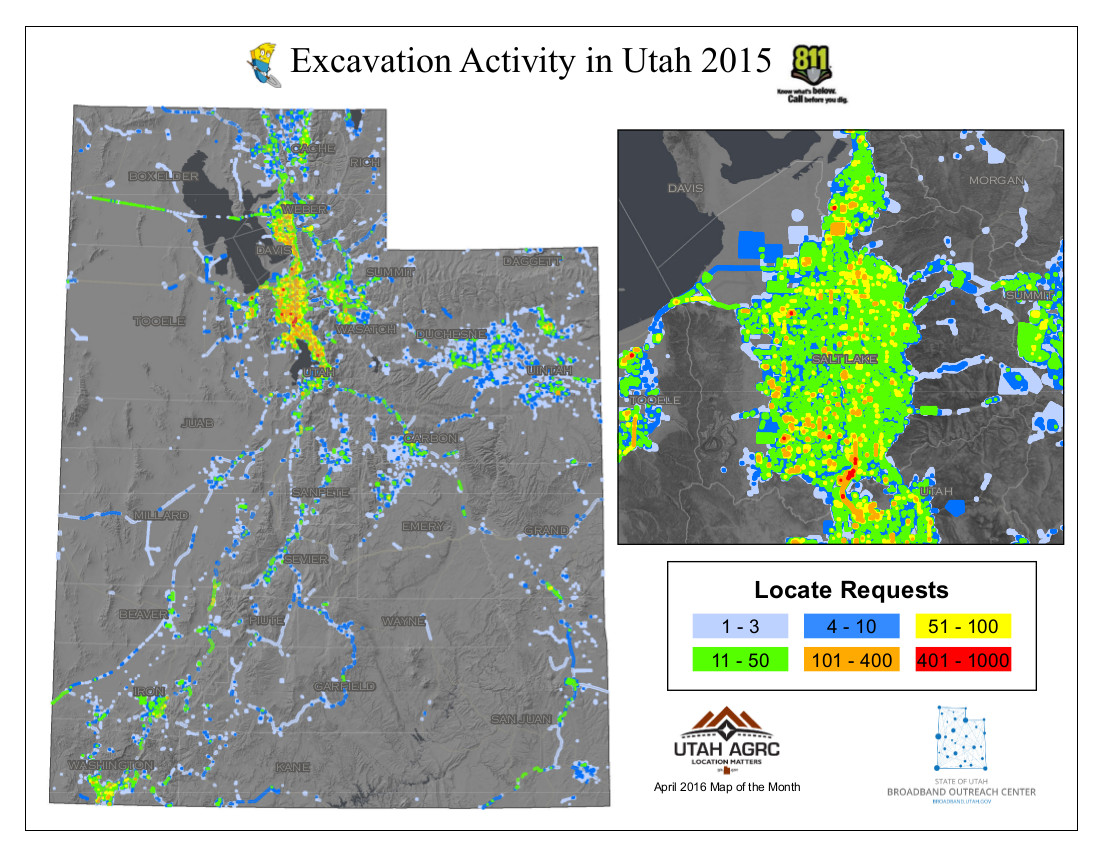 Planning to dig a hole or otherwise move the earth in Utah? It’s strongly in everyone’s interest, including your own, to contact Blue Stakes before you begin!

Our April Map of the Month post looks at some interesting map and time series data from Blue Stakes of Utah, an organization in which 580 Utah underground facilities-owning members participate, including, of course, most of the state’s broadband providers.

Placing a ‘dig ticket’ with Blue Stakes sets in motion a process by which the owners of underground infrastructure near your project are notified to mark known pipes, lines, etc. in the immediate vicinity. In addition to avoiding undesired project complications, working through Blue Stakes greatly reduces the damage liabilities of the person or firms conducting the digging-involved project.

If you keep your eyes open around town, you’re likely to quickly see paint markings, colored by type of underground facility, that are initiated by placing a ticket with Blue Stakes. While maybe not the prettiest to a casual observer, these markings help ensure that really bad things do not happen to excavators, utility service providers, and the general public.

As mentioned, Blue Stakes passes dig location notifications to its member utilities for the appropriate response. Blue Stakes uses GIS mapping data, such as road, address and parcel map layers, to help confirm the dig location. But it also collects its own GIS infrastructure map layers, depicting interest areas for each member utility, that are used to determine whom to notify for each ticket location. This keeps the process accurate and efficient for everyone. 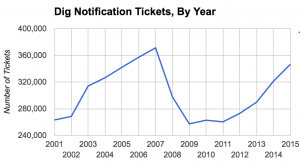 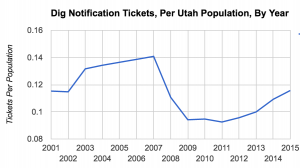 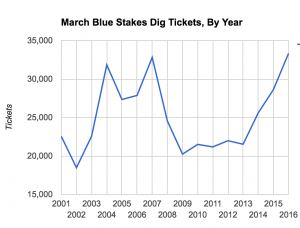 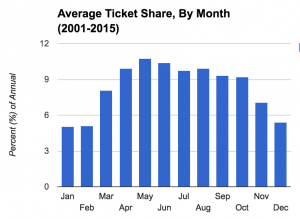 Blue Stakes keeps track of the dig ticket counts and locations (346,681 in 2015 alone!) and publishes a map of the annual ticket location counts, aggregated to 250 foot square grid cells, statewide. Totals by year, and month-to-month comparisons, show that Utah is definitely on a digging upswing. Tickets this March (33,336) were up by almost 5,000 from last March. But, we haven’t yet reached the frenzied excavation levels of 2006 and 2007, especially if the data is normalized by Utah’s growing population. Historically, May, June, and April are the busiest months for Blue Stakes tickets.

Looking at the dig count totals, and their map expression, provides a coarse barometer of economic activity happening in Utah. This is helpful for Blue Stakes’ own planning and staffing, but is also a potentially valuable input to inform decision making in other application areas. As examples, construction activity can often indicate expansion or upgrades to broadband coverage or speeds. It also might inform prioritization for upgrading GIS map data, like roads, addresses, and aerial photography. And, it could be a useful indicator for population forecasting. 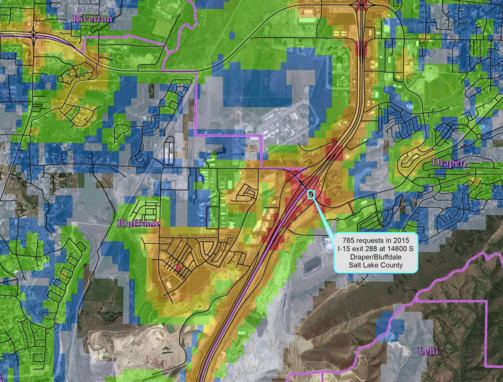 Many thanks go to James Wingate, VP of Operations for Blues Stakes for providing data and info for this post