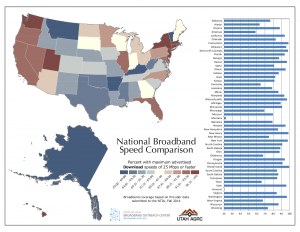 Click on the image to see all the comparison maps

Utah often ranks high in national (and international) studies on access to fast broadband Internet speeds. Most recently, Utah was ranked 4th in the nation for broadband speeds. This month, our maps compare Utah’s maximum advertised speeds with the rest of the country.

Click the map image on the right to open a pdf with 8 maps, including: several maximum advertised download and upload broadband speed levels, as well as some age and education data that also sets Utah apart.

There are multiple reasons for Utah’s faster than average speeds. A big factor for the faster speeds might be Utah’s unique demographics, demonstrated by the last four maps in the series above. Utah has a relatively young and well educated population. Such a young population (about 50% of the population is under 34), combined with high education rates (87% of Utahns have a high school degree) likely drives a high demand for fast internet speeds.

The broadband service data shown is from Fall of 2014. The Broadband Outreach Center is currently in the process of receiving an updated round of Provider service data. To view the maximum advertised speeds in a certain region of Utah, be sure to check out the Center’s residential broadband map at broadband.utah.gov/map.