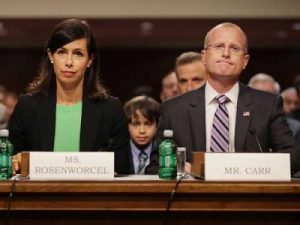 Both nominees for the Federal Communications Commission (FCC) were confirmed for one term each.  Brandon Carr has just been sworn as the newest member. Jessica Rosenworcel, who was also up for a nomination, rejoined the commission for another five-year term.

Both commissioners were nominated back in June. Jessica Rosenworcel was the former commissioner for the FCC under President Obama.  She served terms for both 2012 & 2016 under the Obama administration with her term ending as Senate lawmakers did not extend her term in time before the end of the year. Rosenworcel is an advocate for FCC policies and programs that seek utility-like regulations.  Rosenworcel was active on closing the “homework gap,” a gap that targeted disparities in broadband internet service that make it difficult for students, especially in rural areas, to do homework.

Carr first joined the FCC in 2012 and became a legal advisor in 2014 for the now chairman Ajit Pai.   Prior to joining the Commission, Mr. Carr was an attorney at Wiley Rein LLP, where he worked in the firm’s appellate, litigation, and telecom practices. He represented clients in both trial and appellate court proceedings, including complex litigation involving the First Amendment and the Communications Act. Earlier in his career, he served as a law clerk for Judge Dennis W. Shedd of the U.S. Court of Appeals for the Fourth Circuit. Mr. Carr graduated magna cum laude from the Catholic University of America, Columbus School of Law and obtained a certificate from its Institute for Communications Law Studies. Mr. Carr received his undergraduate degree from Georgetown University.

Chairman Ajit Pai’s approval will wait until Autumn for a possibility of term renewal.