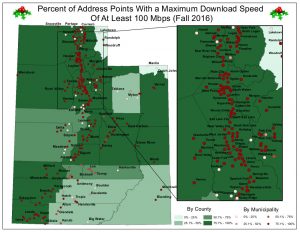 Click to open December 2016’s map: Percent of Address Points with a Maximum Download Speed of at Least 100 Mbps

As we wrap up another year of monthly broadband themed maps, the Broadband Outreach Center’s mapping team decided to create a holiday themed map showing the percentage of address points covered by at least 100 Mbps download.

The map represents the percentage of known addressed properties (address points) with residential access of at least 100 Mbps download by one or more providers. The percentages are aggregated at the municipality and county levels. Municipalities tend to have access to faster residential speeds than more rural and unincorporated areas, and the comparison at the county level to municipality level is important to keep in mind for broadband access analysis and planning.

Look for more broadband coverage analysis as we update our information with the latest broadband speeds. Have a good holiday, and see you next year!