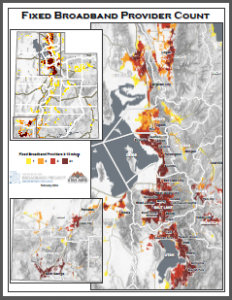 This month’s installment in our Map of the Month series looks at the number of broadband providers capable of providing a ‘fixed’ broadband connection at a defined advertised speed threshold to residential consumers across the state.

The number of providers, especially at the higher speed tiers, is one well-recognized indication of the amount competition in the broadband services market.

The areas colored on the map represent the populated areas of Utah that broadband providers are advertising to.

More detail on provider service area, technologies and speeds for specific locations can be found by using the Project’s Interactive Map.