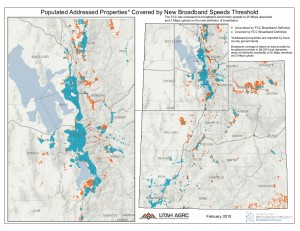 Last month, the Federal Communications Commission (FCC) announced an update to its broadband benchmarks which are now set at 25 Mbps for advertised download speeds and 3 Mbps for upload speeds. Using this updated benchmark, the FCC found that 17% of the United State’s population lack access to broadband availability. There is a significant digital divide with over half of rural Americans lacking broadband access. Despite great challenges presented by Utah’s terrain, remote communities, and federal land restrictions, the digital divide is narrower in Utah.

A quick analysis shows that for the four largest counties (Wasatch Front), 96.3% of the addressed properties in residential areas have access to broadband at the new benchmark levels. For the remaining 25 counties off the Wasatch Front, the number averaged 81.7%. Utah also surpasses the national average for access at the new broadband goals with coverage of 92.55% of addressed properties in populated areas compared to the US average of 83% coverage.

For February’s map of the month, the Project’s mapping team identified addressed properties in populated areas that are covered by at least advertised speeds of 25 Mbps download and 3 Mbps upload. Addressed property locations were submitted by local counties into the statewide address point database.