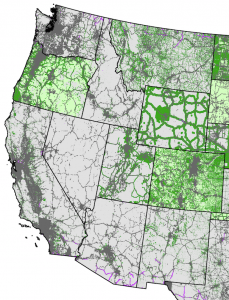 FirstNet coverage objective map (v.1.0) for the western US.

The federal-level First Responder Network Authority (FirstNet) issued its Request for Proposals (RFP) for the deployment of the nationwide public safety broadband network on January 13.

One significant surprise is that FirstNet seems to have chosen to keep the entire initial baseline area provided to states as a starting point for their maps. For example, in our submission, detailed in October 2015’s Map of the Month, Utah removed some very isolated range land and forest land in central and southern Utah in favor of adding service in more settled areas and transportation corridors. The Utah additions are shown in dark green in the map above, but the entire initial base line remains in gray.

Looking at the map included in the RFP, it is clear that there were a great diversity of approaches employed to develop the state coverage objectives.  Wyoming submitted large buffers on major highways. Iowa and the Wind River (WY) area tribal seems to have filled in coverage for the entire state. Zooming in on the map image, there is no visible state submitted additions to coverage objectives in Nevada, Mississippi, Indiana, and New Hampshire. The map also includes objective areas added by Federal agencies, particularly around border and port areas.

Hopefully, all this means that each state will receive back, through the RFP response process, the proposed service and cost information that is most relevant to what will become their own FirstNet implementation plans.