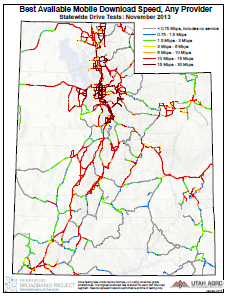 The Utah Broadband Project contracted with Isotrope, LLC to perform a mobile broadband drive test along over 6,000 miles of Utah’s highways and major roads. This dataset was used for comparison purposes to verify coverage areas and speed data submitted to the Project,the NTIA and FCC. The dataset is also useful as it provides insight,, albeit at the time of collection only, in to typical network performance that consumers experience.

Since the speed test platform collected observations every second (or every 15 seconds in the case of the 2013 4G/LTE-specific tests) for each provider, the raw dataset is quite large, with millions of data points. The dataset was difficult to analyze, visualize, and compare because of the sheer number and the density of observation points.

In an effort to create a summary product from the raw data files, a unique approach was taken that aggregates observations to road segments of a near uniform size (0.5 miles). The road analysis segments were generated so that each road intersection became a single feature (0.25 miles in each direction). Overall, this approach cuts down the data records to just under 13,000 road segments, a size that works well for creating statewide paper maps but also for dynamic web maps, for which optimization is much more important. 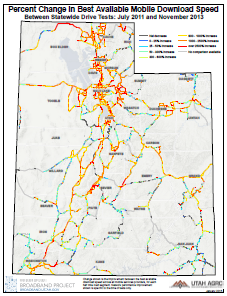 The drive test road segment summary data is downloadable from AGRC’s ArcGIS online website and is shown in the maps within this post (click the map thumbnails to view). Variables contained in the dataset show the best speed result for each segment by provider, technology and year. Additionally, variables show the best test from any of the providers technologies, the best test across all the providers, and the several variables that indicate the change in best performance speed between the two test periods. These ‘best test’ and ‘change’ indicators are only possible through the aggregation and summary at the road segments level.

The 2013 drive test data verified maximum advertised speeds as provided to the Project by AT&T, Sprint, T-Mobile, and Verizon/Strata Networks. The comparison to the earlier drive test was also informative. The first provider’s initial 4G/LTE rollout in just the Salt Lake urban area had just been initialized when the July 2011 drive test was performed. Since then, the 4G and also some 3G coverage expansion is quite evident with excellent high speed coverage for the majority of communities and along many major transportation corridors. There is certainly still work to be done in some areas of Utah, but the pace of capacity and coverage investment has been quite impressive.

As the State moves forward to plan its strategy for aligning with FirstNet’s goals for a National Public Safety Broadband Network, it is possible that additional drive testing will be performed. When needed, and if appropriate, the aggregation, analysis, and visualization techniques used here can easily be re-used and adapted to support any future studies of mobile broadband performance.