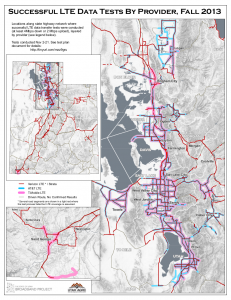 The first map derived from this drive test data is a preliminary map of 4G LTE coverage in Utah. While slower technologies were tested continuously during the drive test, LTE was tested with 15 second pauses in between the alternating upload and download tests. These 15 second pauses were implemented to keep data plan overage charges and power usage within reason.

The resulting map shows the locations of the over 30,000 successful LTE data file transfers (defined as having an average speed of 4 Mbps download or over 2 Mbps upload) for the State’s current LTE providers: AT&T, T-Mobile, Verizon, and Uinta Basin-based Strata Networks (which partners with Verizon to deliver a similar coverage and speed offering).

Additional maps, including a comparison report between the 2011 and 2013 drive test, are planned for the near future. Additionally, the raw drive test data will also be realeased in GIS and .csv format.