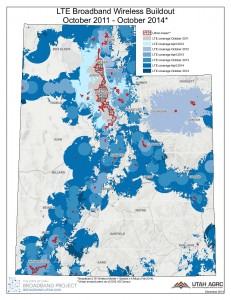 Over the past 4 years, the demand for fast mobile broadband (Internet accessed through a portable mobile device) has greatly increased. Fast mobile broadband is critical for communications in public safety and other sectors needing to connect while on the go.

LTE is a 4G wireless technology that allows for fast mobile broadband connections, and by tracking LTE deployment you can see the expansion of high speed mobile capability in the state of Utah. For this month’s map, LTE coverage is classified as maximum advertised speeds from any mobile provider of at least 6 Mbps download.

This month’s map shows where and when LTE was deployed in Utah from any mobile provider since 2011, and this graph shows the percentage of LTE coverage in urban and rural areas increasing over time. Urban areas in Utah are now 100% covered by LTE, while rural coverage has been steadily growing. To view an individual mobile provider’s footprint, visit our interactive broadband map and use the Providers filter on the right.