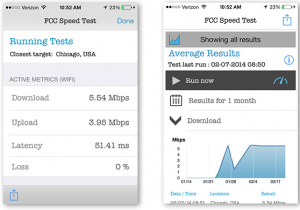 The Federal Communications Commission (FCC) has launched crowd-sourcing apps for Android and iOS mobile devices, designed to measure mobile broadband and contribute to an open data resource that can be used to assess performance across the nation.

The new apps accurately measure your mobile broadband performance and display an in-depth view of speed components (e.g. download and upload speed, latency, and packet loss).  They also keep a historical record of mobile speeds for comparison of performance over time.

The apps are an expansion of the FCC’s Measuring Broadband America program, which is designed to measure fixed and mobile broadband, giving the FCC greater clarity and competition to the broadband service marketplace. By installing and using these apps (download links are provided below), you can help to provide the information that is most needed to best target coverage and capacity expansion in the areas where you value broadband services the most.

Recently, the Utah Broadband Project contracted with Isotrope, LLC to conduct a statewide mobile broadband drive test, which was completed in November 2013. This drive test logged similar data with the FCC’s new app and continues to show Utah’s competitive advantages in broadband. The new apps are important because they will deliver a rich, public domain data set of actual speeds experienced by user’s across Utah.

The FCC has published multiple reports on broadband performance as part of Measuring Broadband America. Data from these tests done on the new apps will provide valuable information to consumers, industry and the FCC on the deployment of networks across the United States.

Download the apps on you smart device by clicking the links below: