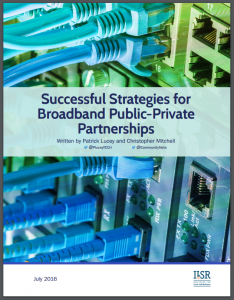 The Institute for Self-Reliance has published a strategic guide and case study analysis on Public-Private Partnerships (PPPs) for Broadband.  Written by Patrick Lucey and Christopher Mitchell, the report considers the role PPPs can play in communities with broadband infrastructure needs.  While building a municipally owned network has been successful for some communities, a PPP is often more feasible for others. Partnerships not only serve the underserved, but can also encourage larger national providers into an area.

The authors define a true PPP as an agreement that balances risk and rewards between the public and private partners.  The term, however, is often used to describe a range of projects that involve private investment with public facilitation, or public investment with private execution.  The authors drew from this report by the Coalition for Local Internet Choice and the Benton Foundation to inform their definition.

The report, titled Successful Strategies for Broadband Public-Private Partnership, provides three in-depth case studies from communities in Maryland, Illinois, and Massachusetts.  A few less than successful projects are also discussed to illustrate some of the challenges faced by PPPs, including legal delays, incumbent competitors, and partners that fail to disclose accurate financials.  The authors suggest communities need to maintain some oversight and leverage over the network, which can be achieved by either directly owning network assets or by having the right of first refusal to purchase the network if private ownership changes.