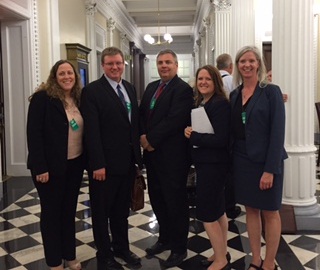 On Monday, September 21, 2015, the Utah Broadband Outreach Center was asked to participate in a private roundtable discussion at the White House, in conjunction with the release of the Broadband Opportunity Council Report and Recommendations. Utah was one of four states (including Minnesota, Michigan and North Carolina) that participated in the discussion which focused on community connectivity and data efforts.

The report details what the Broadband Opportunity Council has committed Federal Agencies to do over the next eighteen months. These commitments are to:

In March of 2015, President Obama signed a Presidential Memorandum “Expanding Broadband Deployment and Adoption by Addressing Regulatory Barriers and Encouraging Investment and Training” which created the Broadband Opportunity Council. The Council’s role is to give specific recommendations to increase broadband deployment, competition and adoption through executive actions within the scope of existing Agency programs, missions and budgets.