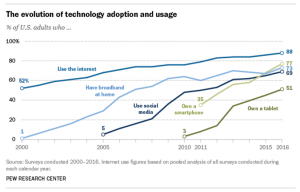 The Pew Research Center reports nine in ten Americans today are online, and technology adoption and usage is growing rapidly.  Driving online activity, in part, is the finding that 77% of Americans own a smartphone, and half of Americans own a tablet.

In addition to smartphone and tablet usage, Pew identifies two additional trends driving American connectivity: the number of Americans using the Internet from home has nearly doubled since the early 2000s, with 88% now connecting at home; and seven out of ten Americans now use social media.

The rate of change for these metrics is impressive.  In 2005, when Pew first started to track social media use, only 5% of Americans subscribed to social network platforms.  A little more than ten years later, 69% of Americans use platforms like Facebook and Twitter, with 86% of Americans aged 18-29 using social media.

Even though broadband adoption is growing, 12% of Americans report they are “smartphone dependent” for getting online.  For this group, home broadband connections are either unavailable or unaffordable.

Pew’s data also breaks down broadband usage by age, race, gender, income, education, and community type (urban, suburban, and rural).  These demographic indicators illustrate the make-up of the digital divide.  Data shows significant disparities for income and education levels, as well as community type.  The data for home broadband usage falls along the same patterns, but with greater disparity.