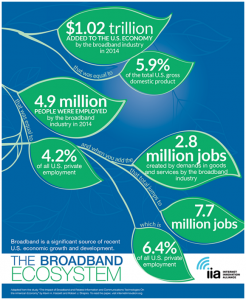 The Internet Innovation Alliance estimates the U.S. broadband and information and communications technologies (ITC) sector contributed $1,019.2 billion to the economy in 2014.  This amounts to 5.9% of the GDP, and the authors of the new report suggest the figure likely underestimates the value added given the broad impact technology has across each sector.

Approximately 4,933,000 full-time workers were employed by the sector in 2014.  The broadband/ICT sector created demand for an additional 2,784,683 jobs in industries that supply goods and services needed.  Altogether, these jobs make up about 6.4% of all U.S. private employment.  What’s more, the average annual salary of a worker in the broadband/ICT sector is $104,390, compared to the average compensation of $65,517 for U.S. workers across other sectors.

Authors of the report Kevin Hasset and Robert Shapiro attribute much of the successful growth in the broadband/ICT sector to a relatively light period of federal regulation.  They project this period may be coming to a close following the Federal Communication Commission’s (FCC’s) Open Internet Order.  This order brought Internet service providers (ISPs) under Title II of the Telecommunications Act of 1934, a designation that subjects ISPs to greater regulatory control.

The FCC’s order was its second attempt to ensure net neutrality and prevent ISPs from blocking/throttling content or charging a fee for a “fast lane” connection.  Hasset and Shapiro believe ensuring net neutrality under Title II may have negative impacts, as it could raise costs for providers and limit capital investment needed to deploy networks.