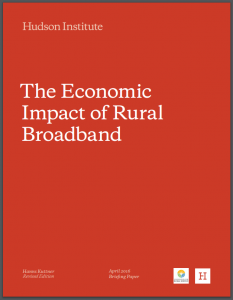 The Hudson Institute has released a new report analyzing The Economic Impact of Rural Broadband.  Authored by Hans Kutter, with support from the Foundation for Rural Service, the report examines the direct and indirect economic impacts of the rural broadband industry on Gross Domestic Product.  In total, the industry contributed $24.1 billion to the states in 2015, and approximately $158 million to Utah’s economy.

The direct economic impacts are defined as the goods and services rural providers use to offer services, with the largest portion of this amount being worker wages.  Additional direct impacts include capital needed to build networks, such as conduit, fiber, wires, poles, and other physical infrastructure.  Indirect impacts are defined as the effects of industry workers spending wages, and the wages paid by industry vendors producing the inputs needed by rural telecommunications companies.

Nationally, the rural broadband industry supported 69,595 jobs in 2015.  Locally, Utah’s rural telecoms (and vendor industries within the state) supported 591 jobs in 2015.  Most of these jobs are held by people working in supportive industries that help maintain ongoing provider operations.  According to the Utah Rural Telecom Association, rural telecoms in the state provide services to more than 50% of Utahns and cover more than 75% of Utah’s geography.

In addition to direct and indirect effects, the rural broadband industry contributed over $100 billion to the economy in e-commerce.  The bulk of this contribution came via manufacturing where it is common for most transactions to occur over broadband.  Retail sales transactions contributed $10 million to e-commerce; author Hans Kutter noted this contribution could be significantly higher if rural broadband networks were fully built out with speeds comparable to urban areas.  The lack of connectivity in rural areas significantly limits the potential of e-commerce.

The Hudson Institute’s report comes at a time when regulated communications services are transitioning from traditional voice and bundled voice/broadband packages to stand alone broadband service.  This trend in the market will continue; the Federal Communications Commission recently proposed Rate-of-Return reforms that support stand alone service, in addition to a Lifeline Program reform that subsidizes broadband for low-income Americans.

What’s more, broadband will continue to serve as a transformational input across many sectors.  Just as e-mail has replaced a phone call, and video-on-demand has replaced video stores, broadband will drive change that we have yet to fully realize.  Telehealth, for example, is expected to fundamentally change healthcare for rural residents who would no longer need to drive long distances to be seen by a specialist.  Video conferencing, in combination with at home “Internet of things” devices to measure health metrics, would create greater demand for broadband as a vital input for the health sector in rural areas.

To watch the Hudson Institute’s presentation of the report and subsequent panel discussion click here: