Over 66% of Utah’s lands are owned and administered by the federal government and its agencies. Among the 50 states, only Nevada has a higher percentage. 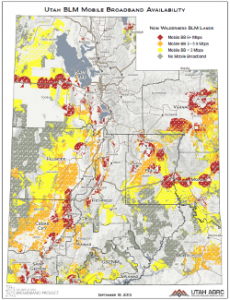 States with a large percentage of public lands (primarily in the west) rely on these lands for resource development, as well as recreation, both of which combine to represent significant contributors to rural economies. The ability to communicate using mobile devices in these often remote spaces has become important for public safety, economic activity, and convenience. Additionally, the use of the mobile broadband is of increased interest to the land management agencies for a variety of reasons.

In attempt to illustrate the importance of the broadband landscape with regard to public lands management, the September maps of the month depict and summarize (stats are accessible below) the availability of mobile broadband for non-wilderness lands administered by US Forest Service and the Bureau of Land Management (also excludes BLM wilderness study areas). Also of significance is that these and other federal agencies have been directed by Executive Order 13616 (June 2012) to streamline processes for the build out of broadband on and across their lands. Part of the intended outcome of this policy, of course, would be to improve the coverage on these same impacted federal lands and business needs of the agencies that manage them. 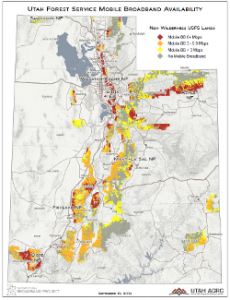 Here is a summary look at how the non-wilderness BLM lands and USFS lands are currently served (Fall 2013) by mobile broadband services (all provider service area aggregated by speed):

It is worth noting that most of the federal agencies with a Utah presence have not actively participated in the Utah Broadband Project inventory of broadband availability at their office location, often citing agency policy on sharing this information. This is unfortunate, as the level of broadband service for rural ‘anchor institutions’ is a good indicator of broadband deployment and adoption in these areas, precisely what the federally-funded state broadband initiatives like the Utah Broadband Project were created to do.