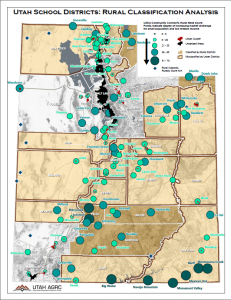 Recently, the Federal Communications Commission (FCC) released an Order making reforms to the E-Rate program, which helps provide discounts to schools and libraries in rural areas ensuring that they are digitally connected.

In this Order, the FCC re-defines what classifies as rural areas using a questionable use of geographic units defined for the 2010 Census. This new rural classification identifies areas that will be able to qualify for E-Rate funding beginning in 2015.

Currently, Utah has 25 of 29 counties that were considered “rural” under the former E-Rate program. Under the Order’s new definition, only 5 of 41 school districts will now qualify for E-Rate funding, disqualifying 310 “rural” Utah schools and libraries for discounts to obtain affordable telecommunications and Internet access.

The September 2014 Map of the Month displays rural classifications of the state based on data from the U.S. Department of Agriculture’s  Community Connect Grant Program.  The larger dots on the map represent the most rural populations in Utah. The black clusters are Census’s urban areas. Census’s ‘urban clusters’ are shown in red and their use by the FCC to define urban lies at the heart of the misclassification. With one stroke of the FCC’s policy pen, metropolitan titans the likes of Beaver, Blanding, Castledale, Delta, Duchesne, Kanab, Moroni, Snowville, and the entire school districts that contain them, are now classified as urban. The map also shows in light tan, rural counties that have lost rural designation under the new Order and are misclassified as urban areas of the state.

A more detailed version of the map’s data can be found here.