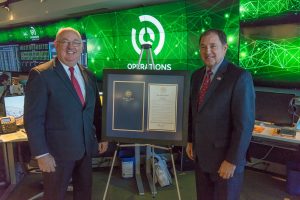 On Thursday, November 9th, a “state-of-the-art” broadband network operations center was unveiled at the Utah Education and Telehealth Network (UETN) on the University of Utah campus.  UETN is a leading innovator in broadband and broadcast delivery throughout the state of Utah and they are also imperative in telehealth resources.  On November 9th, they announced the launch of the expanded and remodeled Operations Center that is a main supplier of network, applications and support services to the state.  UETN’s broadband networks serve Utah’s education and healthcare communities.

Governor Herbert was present at the unveiling of the facilities, as well as other celebrated Utahns, in which the governor gave the official ribbon cutting and addressed the audience.  New real-time network visualization tools have made the Operations Center a positive addition to the education of Utah students and heightened the state’s education and businesses communities.  UETN’s broadband delivery model connects more than 1,500 Utah Schools, universities, libraries, clinics and hospitals.  “UETN’s new Operations Center marks a significant step toward 24/7 hour in-house coverage,” said Ray Timothy, the Executive Director of UETN.

UETN can trace it’s origins back to 1956 when it was used as an educational program.  Throughout the years, UETN has made strides in microwave technology and ground breaking broadband networks, three public television channels, distance learning, the Utah Education Network and the Utah Telehealth Network to improve both education and healthcare in Utah.  The network services over 800,000 learners and educational technology support over 14,000 teachers and telehealth professionals, and increasing educational opportunities.