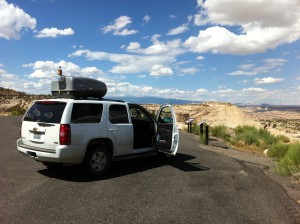 The Utah Broadband Project recently released a comparison report between the 2011 and 2013 mobile drive tests.

In 2011 and 2013, the Utah Broadband Project contracted with Isotrope LLC, to conduct a statewide mobile drive test of over 6,000 miles of Utah roads. The tests logged signal strength and data file transfer speeds for each provider using consumer smartphones.

The report noted several significant improvements in availability of broadband services from the 2011 to the 2013 drive test. One improvement was the increase of 3G services broadband speeds amongst all the carriers, which was in part due to the upgrading of backhaul capabilities necessary to support 4g LTE upgrades at existing cell sites.

In January 2014 the project team released a map that displays locations of over 30,000 successful LTE data file transfers (defined as having an average speed of 4 Mbps download or over 2 Mbps upload) for the state’s current LTE providers: AT&T, T-Mobile, Verizon and Uinta Basin-based Strata Networks (which partners with Verizon to deliver a similar coverage and speed offering).