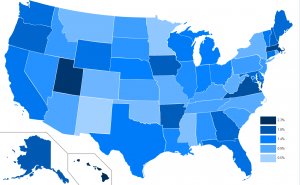 Wearable Device Use by State, July 2015

A new feature of the Data Explorer mapping tool created by the National Telecommunications and Information Administration (NTIA) illustrates just how important it is for Utah to remain a national broadband leader.  The tool compiles and visualizes data collected by the NTIA dating back to 1998, and the results show that Utah has been leading the pack for Internet adoption and use since the NTIA starting collecting data.

As expected, Internet use across the nation has increased dramatically since 1998.  The states leading the pack in 1998, however, still lead the pack today.  Utah, alongside other Internet use leaders Maryland, Minnesota, and New Hampshire, led the nation in Internet adoption rates in 1998 and are still at the top of the list in the most recent set of 2015 Internet adoption statistics.  According to the 2015 NTIA data 80.6% of Utahns use the Internet, with 73.3% of users accessing the Internet from home.

Perhaps as a result of Utahns’ early Internet adoption, our population has been more accepting of new technologies.  In terms of percentage of the population using connected devices, the data shows Utah ranks #1 for the use of smart TV or TV-connected device use, #2 for tablet or e-book reader use, and #2 for wearable device use.

Why is this so significant?  When it comes to technology as we know it today, leaders seem to stay leaders.  The fourth industrial revolution, the digital economy, is just barely on the horizon.  According to the World Economic Forum, this revolution is grounded in the information and communications technology sector.  In 20 years from now, technology will be more fully integrated into our lives than we can imagine.  To try and wrap your mind around it, think back ten years from today to 2006 and envision a world without the iPhone.

When we look at how Utah is doing, the state has earned just about every accolade for its booming economy.  Utah has been ranked #1 by Forbes as the Best State for Business six out of the last seven years, CNBC’s #1 State for Business, and #2 in nation for income growth according to Pew, just to name a few.

In addition, Utah also boasts a list of tech sector accolades that give the state great confidence in its future.  Utah has been given an “A” grade in the Digital States Survey by Government Technology Magazine, is considered the fastest growing state for the tech industry according to the Bureau of Labor and Statistics, and Silicon Slopes has earned record amounts of capital.

Utahns are told the Silicon Slopes is slated to be the next Silicon Valley, so it’s worth wondering: would we have seen this happen if Utah was in the middle of the pack back in 1998?  The national data would indicate no.  States with the lowest Internet use in 1998 still fall behind the national average.

Utah has achieved great success.  We have the fastest Internet in the West and one of the highest Internet adoption rates in the country.  So why should we invest in something we are already great at?  Because leaders stay leaders.  By investing in broadband infrastructure and supporting digital inclusion efforts we stand to gain a labor force that continues to outpace the rest of the nation.  Let’s see what Utah can accomplish with 20 more years of commitment to broadband deployment and adoption.