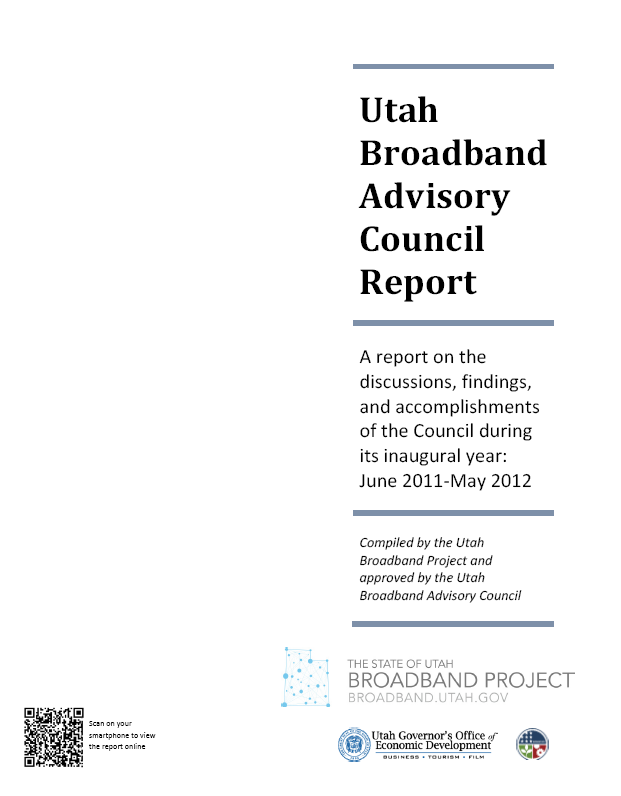 “Utah enjoys a greater level of connectivity than many other states with similar population densities and geography, largely due to the collaboration that exists between public and private entities,” said Tara Thue, manager of the Utah Broadband Project. “We have found that many of these partnerships are unique to Utah and we are often asked to share these achievements with other states.”

Some examples of public/private partnerships in Utah include:

The Council is comprised of public and private entities and has met monthly to discuss how broadband access impacts education, libraries, economic development, public safety, health care, and transportation, as well as rural and tribal areas. For each of these focus subjects, the Report highlights the discussions of the Council and provides specific recommendations for Governor Gary R. Herbert, the Utah State Legislature, and other interested parties to consider.

“The formation of the Utah Broadband Advisory Council epitomizes Governor Herbert’s call for “unprecedented partnerships” and is another example of the public and private sectors working together to find Utah solutions to Utah problems,” said Spencer P. Eccles, executive director of the Utah Governor’s Office of Economic Development. “The level of collaboration and coordination that the Council has generated will impact Utah’s economy and quality of life for years to come.”

Utah has received national recognition for its extensive broadband infrastructure and high adoption rate. According to a 2011 report published by the U.S. Department of Commerce entitled Exploring the Digital Nation: Computer and Internet Use at Home, Utah ranked #1 in average home broadband adoption. In its most recent State of the Internet report, Akamai Technologies ranked Utah as having the fourth fastest Internet speeds in the nation, leading all western states.

The Council will continue to meet and its recommendations will be incorporated into a comprehensive state broadband plan which projected to be released later this year by the Utah Broadband Project. A digital version of the Utah Broadband Advisory Council Report can be accessed at https://blog.broadband.utah.gov/about/broadband-advisory-council.

Click here to view an Executive Summary of the report.

About the Utah Broadband Project
Web: www.broadband.utah.gov
The Utah Broadband Project is a joint effort between the Governor’s Office of Economic Development, the Public Service Commission (PSC), and the Department of Technology Services’ Automated Geographic Reference Center (AGRC) to develop a statewide map of available broadband services and a plan to increase broadband adoption and deployment in Utah. The Project maintains Utah’s interactive broadband availability map, and works with broadband providers to gather and verify data twice each year. The Utah Broadband Project has recently won awards, including a 2011 GovMark Council Award and the 2011 January Achievement Award from the Utah Product Management Council.

About the Utah Governor’s Office of Economic Development
Web: www.business.utah.gov
The Governor’s Office of Economic Development charter is based on Governor Gary Herbert’s commitment to economic development statewide. The mandate for this office is to provide rich business resources for the creation, growth and recruitment of companies to Utah and to increase tourism and film production in the state. GOED accomplishes this mission through the administration of programs that are based around targeted industries or “economic clusters” that demonstrate the best potential for development. GOED utilizes state resources and private sector contracts to fulfill its mission. For more information please contact: Michael Sullivan, 801-538-8811 or mgsullivan@utah.gov.