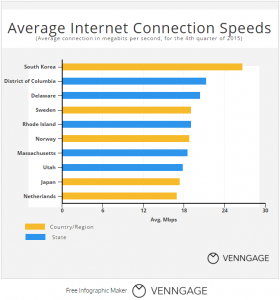 Akamai’s recently released Fourth Quarter State of the Internet Report for 2015 shows Utah has maintained its top spot as the fastest state in the West, and ranks 8th worldwide for fastest average speeds.  Utah currently ranks 5th in the nation for average speeds with 17.9 megabits per second.

When compared internationally, the fastest states in the union fare well against other countries around the world.  South Korea takes the top spot with a whopping 26.7 Mbps, while the District of Columbia comes in second at 21.3 Mbps.  The next fastest areas are split evenly between international regions and stateside, with five nations and five states rounding out the top 10.

Utah’s average speeds have improved by more than 10%, as the state’s Third Quarter average speed was reported as 16.2 Mbps.  All top 10 states, including District of Columbia, saw increases in average speeds.  Unfortunately, Utah saw a small decline in its average peak connection speed (75.8 in Q3 compared to 74.6 in Q4).  Currently, no states in the union have average speeds that meet the Federal Communications Commission’s new 25 Mbps broadband threshold.

Akamai notes that yearly improvements were positive in nearly every state for reported speeds and adoption rates.  The Fourth Quarter saw multiple announcements of gigabit-plus broadband deployments, from both commercial and municipal providers.  Akamai expects these trends to continue, and will issue updated figures in the forthcoming First Quarter of 2016 State of the Internet Report.  The Utah Broadband Outreach Center will continue to monitor these reports as we work towards broadband development that further establishes Utah as fastest state in the west.