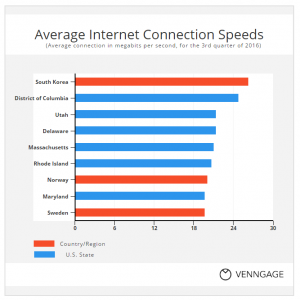 Utah is tied for the #2 ranking in the country for top average Internet connection speeds, according to Akamai Technologies’ Third Quarter 2016 State of the Internet Report.  When compared to the fastest countries in world, Utah’s average connection speeds bests every nation except South Korea.  The state was bumped up three spots from its #5 national ranking in Akamai’s Second Quarter report, beating out the competition from east coast states.

Utah is currently the only western state ranking in the top ten states for average connection speed, with a 21.4 Mbps average speed.  Given Utah’s expansive land area and tough geographic terrain, our competitiveness with small east coast states is a true anomaly.  The state ties for the second spot along with Delaware, with the District of Colombia topping the rankings.

When comparing the speeds of individual states against other nations, Utah’s 13% quarter on quarter gain places the Beehive State in a tie with Delaware for the 3rd fastest globally.  This measure is indicative of Utah’s growing reputation as a tech giant in the global economy.

Akamai notes both average and peak connection speeds have positively improved around the world.  State of Internet editor David Belson commented, “The holiday season serves as one of the true tests of Internet connectivity as consumers activate slews of connected devices at the same time and more families are at home collectively pushing their broadband capabilities to the limit.”

Utah’s #2 ranking tie is the highest spot the state has reached in the Akamai rankings.  This achievement is made possible by the many Internet Service Providers in the state, who have reported time and time again how much they love deploying services in Utah’s business-friendly environment.