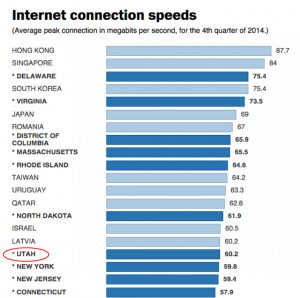 Recently, Akamai Technologies released its Fourth Quarter, 2014 State of the Internet Report ranking Utah among the fastest in the country for average connection speeds. Using this data, the Washington Post pointed out that if you compare Utah internationally, it ranks 17th for highest speeds.

Utah has the sixth fastest average Internet speeds in the country and the fastest speeds in the western United States. Utah also ranked seventh for average peak connection speed by state. These statistics highlight Utah’s ever changing broadband landscape as the state continues to be a national player in broadband capabilities.

The article noted that broadband speeds are expanding nationwide and conditions seem good for even more growth.

Check out the Utah Broadband Outreach Center’s interactive broadband map to see speed and provider options in your area.