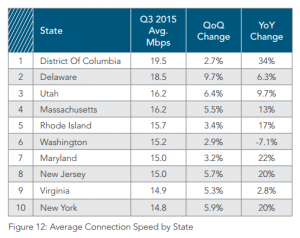 Akamai Technologies released its Third Quarter, 2015 State of the Internet Report, giving Utah top rankings for yet another quarter. The state ranked 3rd in the nation for its average connection speed of 16.2 Mbps.

According to the report, both Utah and Massachusetts had strong quarterly gains for average peak connection speeds at 24% and 18% respectively, while Washington had the smallest quarterly increase among the top 10 at 4.5%.

With regards to adoption, “Utah and Delaware led the gainers, with increases of 20% and 17% respectively.” the report stated. “Utah’s jump allowed it to join the top 10 in the third quarter, pushing out Pennsylvania,”