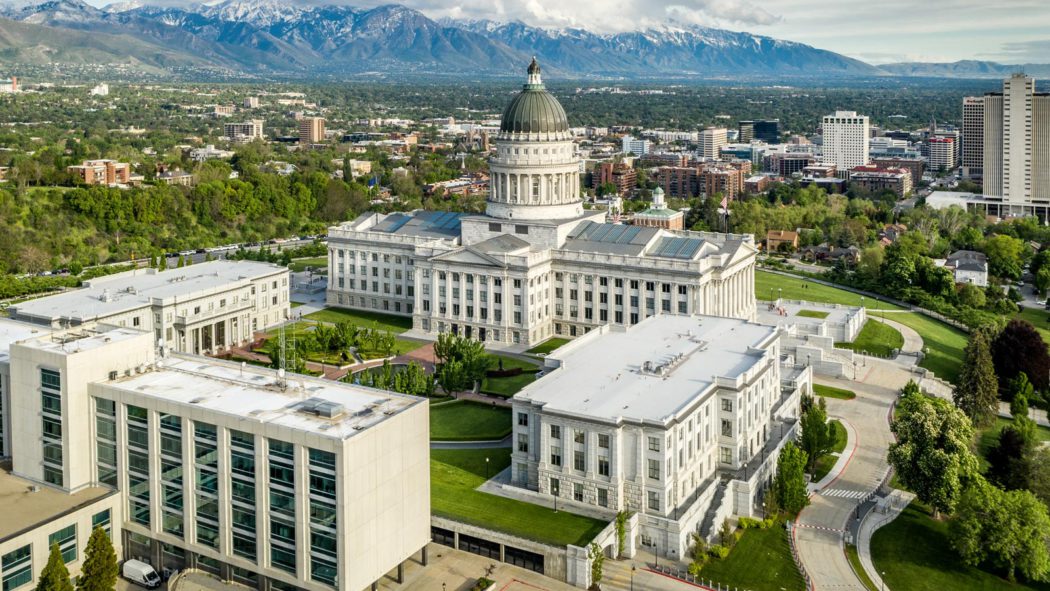 This article is part of a series providing a glimpse into Utah’s political leaders’ daily work schedule and lives. View other articles in the series here.

Justin Harding is the chief of staff to Gov. Gary Herbert, Utah’s 17th governor. In this role, he has many responsibilities, including serving as the governor’s spokesperson, managing executive staff, coordinating with the governor’s cabinet or standing in for him as his proxy for government business. Harding’s days are filled with both challenging and rewarding opportunities.

As chief of staff, he enjoys a wide range of activities, such as focusing on personnel issues, building relationships with legislators and conducting policy or political discussions with key stakeholders. He views his role as Gov. Herbert’s chief of staff as an enabler rather than a gatekeeper and ensures individuals who need access to the governor have that access.

Working with the governor’s scheduling, communications and policy teams, Harding’s primary responsibility is to ensure the governor is inclusive in process, collaborative in approach and moderate in tone.

The following introductory video and text provide a glimpse into a recent “Day In The Life” of Chief Justin Harding:

A Day In The Life

January 12, late evening — After reviewing weather forecasts for the following morning, I set my alarm to wake me up in the middle of the night to determine if we needed to delay arrival for state employees. “Commuter Special” storms really have an impact on our Public Safety and Utah Department of Transportation employees.

January 13, 12:23 a.m. — I awoke from a deep sleep and sent a text message to our executive leadership team and the directors of Department of Human Resource Management, Utah Department of Transportation, Department of Technology Services and Department of Public Safety, requesting their input on the incoming storm.

For the next two hours, we exchanged texts regarding the forecast and its possible impact on commuters and public safety and transportation employees.

I fell into another deep sleep between 2:30 and 5:30 a.m. After checking messages from the groups and weather conditions, we decided not to delay the opening of state offices. The storm, while initially forecast to be very strong, had not delivered as anticipated.

5:45 a.m. — I drove my daughter to Skyline High School for early morning swim practice and took our almost one-year-old Aussiedoodle dog along for the ride.

6:15 a.m. to 7 a.m. — I helped my wife wake up the remainder of our children, and spent 30 minutes on the elliptical. While exercising, I take time to listen to inspirational content and catch up on the latest news.

7 a.m. — Time for a quick shower because Monday mornings are usually when our 18-year-old son, who is serving as a missionary for The Church of Jesus Christ of Latter-day Saints, calls home. We look forward to these video calls each week. I was able to spend 30 minutes on the video call with him before leaving for work.

8 a.m. —  While leaving our neighborhood, I did a quick check-in with my executive assistant, Kathy Whitehead, to update her on my arrival time. She informed me that she fell and broke her wrist. She remained positive, that’s her nature, and I expressed my regrets and hustled into the office.

9 a.m. — Synchronization meeting with senior staff. Light agenda, but it was good to catch up with everyone and plan for the week. With the legislative session and state of the state coming up, we were in full-blown preparation mode.

We decided to clear Gov.’s Herbert calendar and meet with him and senior staff on the tax modernization package. Opponents of the plan organized a signature-gathering campaign to overturn the plan by putting it on the November ballot as a referendum.

10 a.m. — Meeting with legislative leadership, staff and members of our senior team to go over legislative and messaging options around tax modernization. We decided that we would continue to communicate factual information and monitor the signature-gathering effort. It seemed there was an organic effort underway, and we wanted the voice of the people to express itself naturally.

11 a.m. to 1 p.m. — Meeting with Gov. Herbert and senior staff to review the latest information on the tax modernization package. We decided that if referendum backers obtained the required number of signatures or approached a respectable threshold, we would work with legislative leaders to call for a repeal of the bill.

1:30 to 5 p.m. — We spent the rest of our day on internal meetings with our senior policy advisor, communications director, general counsel and scheduling team.

I Visited with a colleague who is a breast cancer survivor and learned more about her story. A dear friend of ours has been diagnosed with breast cancer, and I wanted to be able to pass along some good cheer and practical suggestions to her from a survivor.

I also communicated with our commissioner of agriculture, who was in the process of resigning to announce his run for Congress. We discussed the timing of his announcement and made sure he was squared away with our general counsel and human resources departments. I also communicated with Gov. Herbert to make sure he was fully aware of the details and had signed-off on the appointment of an interim director for the department.

5 p.m. to 6:30 p.m. — Finally, some downtime to review and respond to email. After getting through a backlog of text messages and emails, I packed up my bag to make the drive home and reconnect with my family.

I checked in with Kathy to see how she was doing. X-rays confirmed a break, but she was optimistic that she could avoid surgery.

7 p.m. — Quick dinner and changed into comfortable clothes. I had an enjoyable evening with my family, reading books and helping put our three youngest kids to bed.

8:30 p.m. — Bedtime routine. The bedtime routine at our house involves making lunches, brushing teeth, getting into pajamas, saying personal and family prayer and reading from our kids’ favorite books.  Throughout the evening, I monitor my phone for any critical text messages or emails.

9:30 p.m. — With the kids mostly settled, I open my e-book, “Day of Infamy,” and read for about 45-minutes. I capped off the evening with a cup of homemade cocoa, and given the low hours of sleep from the night before, fell fast asleep. Tomorrow’s a new day!