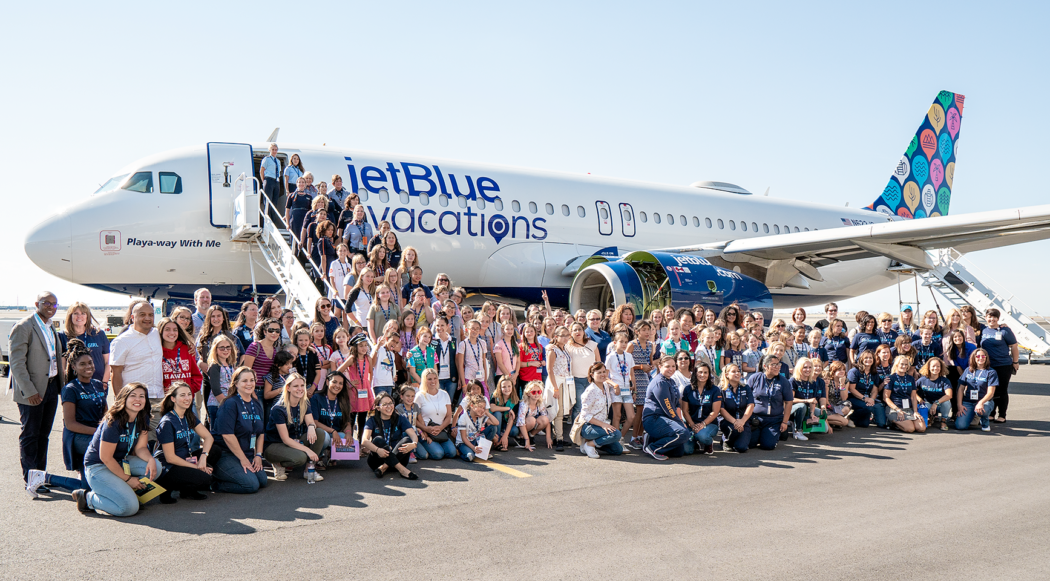 Close to 100 Utah girls, ages eight to 14, joined female JetBlue leaders. Which included, pilots, technicians, and inflight and ground crews for an insider’s view of the aviation industry. The girls had an afternoon of hands-on engagement activities at Atlantic Aviation, launching JetBlue’s first-annual Salt Lake City “Fly Like a Girl” event.

“Our hope today is that you spark an interest in a field of study or career path, so that you can help change a number of challenging statistics around the number of women in STEM fields, particularly in engineering and aviation,” said JetBlue President and COO Joanna Geraghty — the highest-ranking woman in U.S. commercial aviation — on taking the stage to address a crowd of local parents and their daughters. “We all know that men hold a majority of STEM careers, but did you know that women hold only 24 percent of those jobs, and that less than 7 percent of airline pilots are women? Utah is among the states that have a lot of work to do in bringing the ratio up to 50-50, and the governor’s office here is doing a great job of working to create and support those opportunities.”

This was the first time “Fly Like a Girl” was held outside of New York City, having launched there in 2014. The event was hosted by the JetBlue Foundation together with JetBlue Equals and the airline’s Women in Flight resource group in partnership with the Utah STEM Action Career, Atlantic Aviation, and the Girl Scouts of Greater Salt Lake.

The afternoon’s highlight came when the hangar doors were pulled back to reveal a JetBlue Airbus 320, its entryway open with smiling JetBlue pilots, inflight members, and technicians — all women — lining the stairs. Girls boarded the plane, toured the flight deck, talked with the pilots about their work, learned from inflight crewmembers what goes into flight preparations such as food service and snacks, and tech ops showed them the engine and explained the mechanics involved in its engineering and maintenance, from construction to everyday upkeep.

“While we’re here to talk about girls in STEM, a lot of you have boys as well, but it really comes down to breaking down the gender barrier that translates in how we present STEM opportunities to our girls — it goes back to the saying that ‘You can’t be what you can’t see,’” explained Dr. Tamara Goetz, STEM Action Center executive director, in advising parents on engaging and sustaining their daughters’ interests in science, technology, engineering, and math. “We need to increase the number of women role models and really examine our micro- and macro-messaging around STEM pursuits. What we’re facing in the disparity is impacting our innovation, creativity potential and competitiveness.”