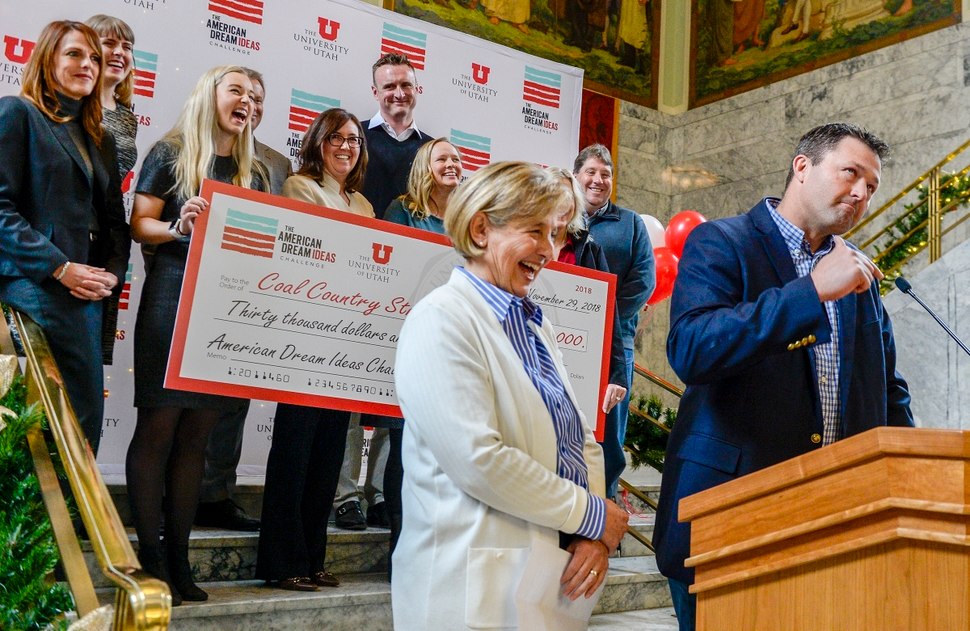 This year, the University of Utah’s American Dream Ideas Challenge inspired people from a wide variety of backgrounds to compete for the opportunity to help improve middle-class life in Utah.

The goal of the challenge was to see who had the best idea to help 10,000 households in Utah’s middle-class gain a net income of 10 percent or more by 2020.

The top 10 finalists received a $10,000 prize to help refine their ideas. Then, three finalists were selected and given a grant of $30,000 to help develop their plan even further. The three finalists will compete on Jan. 29, 2019, in Phoenix for up to $1 million from Schmidt Futures.

One of the finalists is a group led by the Kem C. Gardner Policy Institute called the Coal Country Strike Team.

For the last nine years, the economy in Utah’s Coal country has contracted. Since the coal industry’s peak in 2001, Utah’s coal production has fallen by 47 percent. Because of this, Utah’s coal country, which includes Carbon and Emery counties, are struggling. Employment declines, unemployment, poverty rates and lower home values have hurt Carbon and Emery county residents. This situation inspired the Coal Country Strike Team to step-up.

The first is called Silicon Slopes East. It will use high-speed broadband from Emery Telecom. Price would open a Silicon Slopes chapter and develop co-working space for entrepreneurs, provide entrepreneurial training, and scout-out partnerships for remote work sites in the area.

The second policy is called Hearth and Home, a program to help combat rising home prices. The proposed solution, in part, plans to “revitalize the housing stock in the two counties.” There are also plans to create an Opportunity Zone investment just outside of Price, Utah.

The third step would be the Red Rock Gateway, which focuses on tourism development. The goal here is to capitalize on the region’s attractions such as the San Rafael Swell and 9-Mile Canyon. These sites and more can attract visitors from around the world.

Finally, custom incentives will be used to help bring more people and business to Utah’s coal country. Few companies use statewide economic development incentives, so the Coal Country Strike Team’s mission is to “capitalize on the designated Opportunity Zone, and consider how to keep local property taxes in the area.”

We wish the Coal Country Strike Team all the best as they prepare for the grand prize next month.