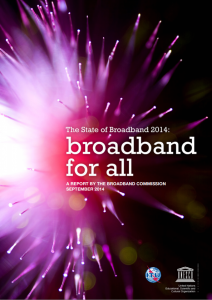 Recently, the Broadband Commission for Digital Development released a report titled, “The State of Broadband 2014: Broadband for All.” This report analyzes the worldwide access, use and deployment of broadband across globe.

According to the report, over half of the global population will be able to access the Internet in just three years, with the number of Internet users rising from 2.3 billion in 2013 to 2.9 billion by the end of this year. There are now 77 countries where over 50 percent of the population is online, ranking Iceland number one with 96.5 percent, followed by Norway, Sweden and Demark. The United States ranks 19th in terms of number people online.

A full version of the report can be found here.