Changes are coming to the data collection process for broadband availability mapping data. Since 2010, states have collected data from providers, and then submitted a compilation of the data to the National Telecommunication and Information Administration (NTIA). Starting in spring 2015, the Federal Communications Commission (FCC) will collect mapping data directly from broadband providers using the new form 477. The transition will take place this fall, with both the states and the FCC collecting data from broadband providers. The due date for the FCC’s new form 477 is October 1, 2014. The Utah Broadband Project’s final due date for updating data is September 1, 2014. To better understand this change, this month’s map of the month explains the changes (part 1), and next month’s map of the month (part 2) will have a more in-depth analysis on how the change will affect the statewide views of broadband coverage.

Major differences in the data submissions between current standards and FCC standards:

The biggest visual change on maps will be that fixed wireless is no longer mapped by actual modeled coverage, but will be mapped using 2010 census blocks, along with other fixed broadband technologies. Only 2010 census blocks will be used, regardless of their size. If a provider provides service in part of a census block, then a whole block is marked as covered. This will also impact coverage in rural areas formerly described along road segments. See below for side by side examples of the old dataformat versus the new data format. 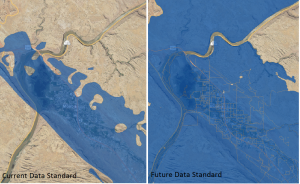 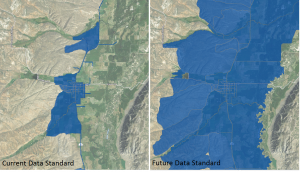 In short, the FCC model will result in a coarser view of broadband coverage and it will be this less geographically specific dataset that will inform broadband policy decisions. To learn more about the new form 477, see this webpage about the changes to the form by the FCC.  To learn more about the difference in data submissions, see this slideshare. Also, the FCC will be holding a webinar on August 6, 2014, to discuss the new form 477 filing interface.

The Project greatly appreciates all the support and cooperation received over the years from broadband providers. The state broadband map is only possible because of all the hard work Utah providers have done in Utah. The Project would like to make the transition to the FCC collecting the mapping data as smooth as possible. The Project’s mapping team plans to provide each local provider with a list of census blocks for their area in the new form 477 format. For providers who are in multiple states, the Project will create a census block file for them for Utah on request. The Project also plans on meeting with local broadband providers to make sure their coverage is mapped accurately in both the current format for the NTIA and FCC format before September 1.