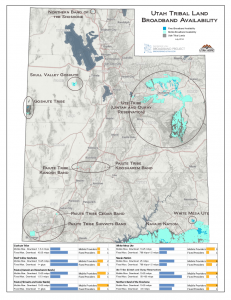 On the whole, Utah has great broadband coverage, especially in urban areas. While Utah’s broadband coverage in comparison to similar states is a success story, there are still a few rural areas that lag behind in speed offerings and the number of providers from which to choose. For the 2014 Native American Summit in Orem, UT, the Project’s mapping team analyzed broadband availability on tribal lands.

Some tribal areas do have access to high broadband speeds. With the exception of the Goshute’s land in far western Utah, most tribal areas have good access to mobile broadband. On the Navajo, White Mesa Ute, and northern Paiute lands, mobile providers are advertising faster speeds than fixed broadband providers. In these cases, mobile can be a good alternative to fixed services.

Overall, there are improvements that can be made to broadband access on tribal lands. The northern Paiute, White Mesa Ute, and Navajo lands all only have access to a maximum of 1-3 Mbps download over fixed broadband, and the current service covers only a fraction of their land. This is likely due to the rural locations of these areas and the low population density, which creates a higher market challenge. While the challenge is high, it is important that these areas obtain broadband access, as more and more people rely on broadband for education and bsuiness communications, especially in rural Utah.