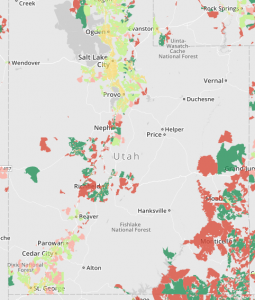 Last month, the Federal Communications Commission (FCC) announced nearly $1.7 billion to price cap carriers to expand and support broadband service in rural areas as part of Connect American Fund Phase II (CAF II). The funding will go to support networks that can deliver broadband speeds of at least 10 Mbps download and 1 Mbps upload, as long as areas have no competitors offering at least 4 Mbps download and 1 Mbps upload, and the cost of providing service according to the cost model is between $52.50-$207.81.

Utah Telcom boundaries represent the territory that telephone companies cover. Broadband DSL technology is closely tied to telephone infrastructure. Of the 14 telecommunications providers in Utah, only CenturyLink and Frontier Communications are price cap carriers and qualify for CAF funding. The FCC has created a map that identifies areas nationwide that have been determined to be eligible for CAF II funding. The map breaks down areas as served or unserved by 10/1 Mbps, and whether areas fall in the funding benchmark range. On the FCC map, green areas are eligible under all qualifications, and red areas qualify in the speed category, but are above the price cap.