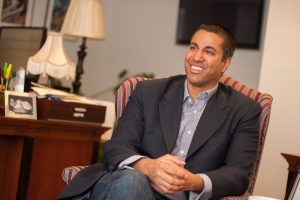 On January 23rd, President Trump appointed Commissioner Ajit Pai as Chairman of the Federal Communications Commission (FCC).  Chairman Pai was the most senior republican of the FCC, and has served five years as a commissioner.  Many have speculated about the new chairman’s agenda, but most agree Chairman Pai will likely cut regulations and follow the letter of the law.

Prior to joining the commission, Chairman Pai worked for many years in the FCC’s Office of General Counsel.  His legal expertise and background has been an asset to the commission, as he has been able to quickly and easily respond to legal questions.  Many of Chairman Pai’s dissents have focused on the legal authority of the FCC.

In a speech at the FCC on January 24th, Chairman Pai thanked his fellow commissioners and colleagues, and expressed his affection towards the agency, saying, “It’s hard to think of any other government agency filled with people who have that rare combination of dedication, expertise, and collegiality.”

In the same speech, the Chairman also highlighted a key policy priority going forward, saying, “One of the most significant things that I’ve seen during my time here is that there is a digital divide in the country—between those who can use from cutting-edge communications services and those who do not.”  He went on to say the commission should do what it can “to help the private sector build networks, send signals, and distribute information to American consumers, regardless of race, gender, religion, sexual orientation, or anything else.”

Chairman Pai is generally considered to have a free-market approach to regulations.  He voted against most of Chairman Wheeler’s policy proposals.  He was against the Open Internet Order, and many expect he will take on Net Neutrality, despite the recent court affirmations.  He was quoted in December 2016, “In the months to come, we also need to remove outdated and unnecessary regulations.  The regulatory underbrush at the FCC is thick.  We need to fire up the weed whacker and remove those rules that are holding back investment, innovation, and job creation.”

The Chairman is a Buffalo, New York native but grew up in rural Kansas.  The 45-year-old is a son of immigrant parents and will be the first Indian- American to hold the position.  Ironically, Chairman Pai was nominated to the post on “Pie Day,” January 23rd.