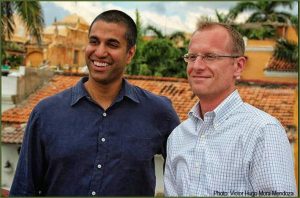 On June 28 the announcement was made to nominate Carr for the remaining term of former FCC Chairman Tom Wheeler and start a full term the following day on June 30, 2018.  The official nomination was sent the following day and is likely to be paired with former FCC commissioner Jessica Rosenworcel, who is also nominated. The Senate Commerce Committee will hold confirmation votes for them on August 2.

Carr first joined the FCC in 2012 and became a legal advisor in 2014 for the now chairman Ajit Pai.   Chairman, Pai said, “I am very pleased that Brendan has agreed to return to the office of General Counsel to lead it.” Other FCC commissioners have also reacted positively to his announcement.

Margaret Harding Mcgill of Politico mentions a preference for “old-hands” to head the agency, reflecting on past commissioners being re-nominated.  It is indicated that his backing from Chairman Pai is likely what set him apart from other contenders for nomination.  There are only three commissioners now on the FCC as the remaining vacancies are waiting to be filled and the FCC is continuing to operate as usual.

Prior to joining the Commission, Mr. Carr was an attorney at Wiley Rein LLP, where he worked in the firm’s appellate, litigation, and telecom practices. He represented clients in both trial and appellate court proceedings, including complex litigation involving the First Amendment and the Communications Act. Earlier in his career, he served as a law clerk for Judge Dennis W. Shedd of the U.S. Court of Appeals for the Fourth Circuit. Mr. Carr graduated magna cum laude from the Catholic University of America, Columbus School of Law and obtained a certificate from its Institute for Communications Law Studies. Mr. Carr received his undergraduate degree from Georgetown University.